How did it begin?
In 1635 somewhere in England, Roger G. Pepperspray sat down with his wife, all day long he had been weaving a tapestry of some knights and horses frolicking on a battlement, when he broke down in manly tears. His wife, being a woman of the time, knew best not ask him anything lest she get a beating for speaking out of line. His son, a boy of no more than 34 approached his father with the lanyard of speech, clearly indicating that he was requesting permission to talk. His father, through watery eyes bade him come hither and talk. His son uttered the now world famous words

“Privytum father, privytums the matter oh father of mine, son of grandfather but not daughter of mother, wife of father and mother of myself”

Privytum was the word used by these simple people meaning ‘What’. Roger looked at his son, who was now also weeping uncontrollably. And said “Oh Disconipple (for that was his name) it’s these damn and blasted tapestries, every day I do them by hand and every day my hand gets such cramps, come evensong I cannot clench my fist, your mother has gone unbeaten for six whole weeks now, she is getting ideas above her station, last night she tried to get in my bed and touch my thigh!”

Everyone looked agog at their mother, and lo did she feel ashamed!

Disconipple went away from that conversation a changed man, he was resolute to help his poor father. Long were the nights he would sit at his drawing parchment, trying to discover a way to automate the tapestry making process.

Ikhambard Kingdom Brunill
In 1730 a man called Ikhambard Kingdom Brunill had an idea “What if we could automate manufacturing processes, what if we could automate the shit out of them, so much so that everything is made by automatons, what if we could build giant railways spanning every inch of the shitting country, what if I could use social media to not only connect with friends, but also businesses as well, I’d social the shit out of that media” he was well known for swearing inappropriately. When the queen knighted him he said “Thank you, you shittower”!

Ikhambard changed his name is Isambard Kingdom Brunel because people kept spelling it wrong. He was a pioneer in civil and uncivil engineering. By day he would work as a forestry commissioner but by night he would work on his plans of building huge structures, big enough to allow steam powered locomotives to navigate over large stretches of water. His plans for automatons and social media fell by the wayside when he invented the bridge. Up until that point no human had ever thought to build a structure over water for fear of trolls and/or sexually aggressive mermaids.

He build the Clifton suspension bridge all by himself one warm summer but lost his job at the forestry commission which is why he invented a toll charge to cross his bridge!

The industrial bit
Isambard Kingdom Brunel’s bridges meant that trains could now get to any bit of the country they wanted. This meant that goods could be delivered from one location to another with relative ease, this unfortunately put highway men out of work, luckily they all found new jobs in local and national government, so they could still rob people, am I right? Yeah satire!

The ability to transport things meant that materials and goods were able to be moved. In time this meant that giant machines could be made in one place and shipped somewhere else. This was well good! Within 50 years every town had factories and mills, people were making all kinds of shit.

During the industrial revolution almost everything that was invented had some kind of wheel attached to it, the spinning jenny was essentially a massive wheel, all forms of transport now had wheels attached to them, horses were not keen on this but in time the learned to adapt.

The spinning Jenny
The spinning Jenny was the spinning wheel that started it all, before she was invented spinning wheels were just a round wheel like structure which could change a small amount of straw into gold. But with the advent of The spinning Jenny, up to 8 times more straw could be made into gold. Thus they went into mass production and were shipped to every mill across the land. The only problem with them was that they were quite small machines and only children’s little hands could work them, so every child was taken out of school, regardless how near to finishing their GCSE’s they were and made to work on The spinning Jennys.

Within 2 years cases of ‘sleeping beauty syndrome’ was confirmed in 2 out of every 7 children, this condition would render them asleep for 100 years if they pricked their finger on one of the 8 needles found in The spinning Jennys.

In time better, less deadly milling machines were invented and cases of sleeping beauty syndrome greatly deminished. But kids were just being lazy so they all got sent back to school where they could play and learn. Yet kids today moan about having to learn sums, spoiled little buggers, get them back in the mills, then they’d know what hard work was!

Children from 13 – 18 would often work up to 69 hours a week, you hear that you little shits on your xboxs, moaning because you have to do some washing up or help clean your own room. 69 hours a week! Get off your lazy little spoiled arses, stop hanging around bus shelters, pull your trousers up and make yourselves useful, you set of ungrateful ingrates! Also stop playing your shit tinny music on your phones in public, little bastards!

Environmental impact
With half the world now running factories and mills, the impact on the environment was felt quickly. Whole towns would be charged black with soot from chim chimneys, thick dark dust would coat the faces and faeces of every man, woman and boy working in the mills. Come the Christmas of 1874, when the snow fell, it was not pristine white flakes of winter fun, it was thick black balls of dirt, soot and grime. This time was known as ‘Mucky Christmas’, which is where the getting a lump of coal for Christmas comes from if you’ve been naughty.

With great economic boons comes great financial rewards and during this time every living human was a millionaire, people would spend every night down the pub getting drunk, which of course meant the population soared (are were sore), within 100 years of the start of the industrial revolution the world’s population went from 147,000 to well over 2 million people! An utterly unfathomable statistic. Obviously that number of humans could not be sustained for long and shortly after the plague of 1874 the population of the earth had gone back down to a manageable 800,000.

The end
The end of the industrial revolution was rapid and shocking to all involved. Up until 1903 factorys were chugging away, belching out their black foul air, children worked hard, long and greatfully. But in 1904 electricity was discovered in a mine in Brixton, the land above it was named ‘Electric Avenue’ and from that day on robots did everything and thus the revolution was ended. 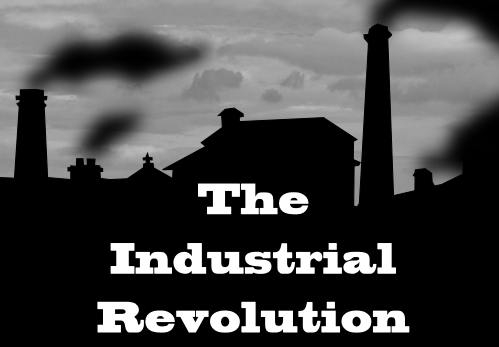